Vol Opt is the boss of the Mine area, located in the central control room of the underground facility.

The following quests are recommended for hunting this enemy:

During the first form, the way damage is transferred from Vol Opt's monitors into his core is bugged. When an offensive technique (barring Megid) or physical attack is used on Vol Opt's monitors while the core is on them, the attack deals damage to the monitors normally, then, if Vol Opt's core flinches as it does when the monitors are hit while the core is vulnerable, additional damage is transferred to the core for each monitor hit, using the physical damage formula:

As the phase is finished when the core's HP is depleted, it is viable to end the first phase very quickly by equipping a high ATP weapon like Excalibur, or Red Saber + Crimson Coat with FOnewearl and using fast multi-target techniques such as Gizonde to stun-lock Vol Opt.

In the Normal, Hard, and Very Hard difficulties, there is a conduit hanging from the ceiling in Vol Opt's monitor room. Knocking it down to the ground by damaging it will cause Vol Opt to short-circuit when his pillars attack the room with lightning. When this happens, all of the pillars in the room come up at once and are stunned, making all of them targetable for a short period of time. This mechanic can be abused to defeat Vol Opt's first form, even in multiplayer, through the use of a well-raised Mag with the Pilla photon blast.

First, make sure you enter the boss fight with a full photon blast meter. When the fight begins, shoot down the conduit and position yourself on top of it. Vol Opt will circle around the room on the monitors - you can ignore them. When he stops at one of the monitors, he will raise some pillars from the ground. Again, do not attack anything. Instead, watch closely while he charges up his lightning attack, and then activate your Pilla photon blast just before he unleashes.

If timed properly, here's what will happen: During the couple seconds of invulnerability before the photon blast activates, the lightning attack from Vol Opt will miss you and only strike his conduit on the ground, causing him to short-circuit. While short-circuited, all of his pillars become exposed and are targetable, which conveniently means your Pilla photon blast will strike all of them at once. If your Mag's IQ is high, the damage output on the pillars will be great enough to destroy all of them at once, thus ending Vol Opt's first form instantly. This is potentially the fastest way to defeat Vol Opt's first form.

Again, this is not possible in Ultimate, as there is no conduit for Vol Opt to short-circuit himself upon, meaning you won't be able to target all of his pillars in one photon blast. Also, if you are in multi-player, you must ensure that your allies understand not to seek out and attack the pillars, else Vol Opt's lightning attack may be delayed or completely prevented and ruin your ability to time the photon blast properly.

Control of your character is returned whenever your character stands up. This means that ending first form knocked down or dead will allow you to act during the cutscene. The easiest way to take advantage of this is any self-damaging weapon (eg Orotiagito, any Lavis-series weapon, or Girasole) and a scape doll. It is not possible to swap weapons while the cutscene is active.

Vol Opt will cycle through monitors, then the pillars will raise and use techniques to attack. In Ultimate the pillars attack twice with two random techniques (four attacks total). 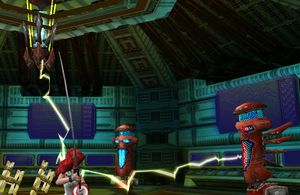 Gizonde arcs from the red pillar, through one or more players, to the central column. 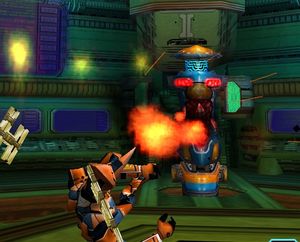 The red pillar shoots a fireball at the targeted player 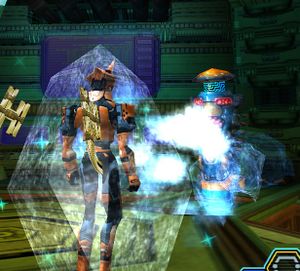 In Normal through Very Hard Vol Opt's second form will rotate through attacks in a fixed order: Missiles, Stomper, Stomper, Heal, Prison. The rotation in Ultimate is random. Each attack has a corresponding node which will face the targeted player before use and it will no longer be able to use that attack if the node is destroyed. 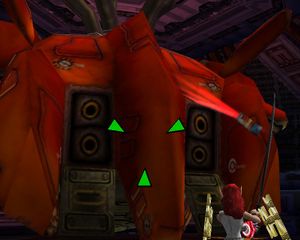 Vol Opt fires slow moving missiles that home on their target. The missiles detonate on contact or after a set amount of time. 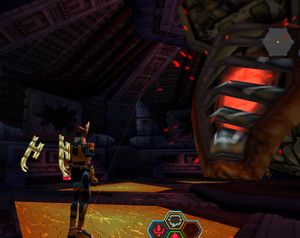 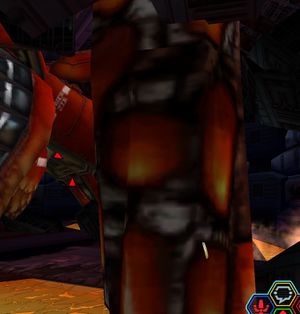 Vol Opt sends out a tracking laser that follows a player. After a short amount of time pillers come down from the ceiling to crush the targeted player. The pillars can be avoided by running in a straight line. 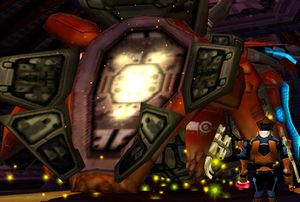 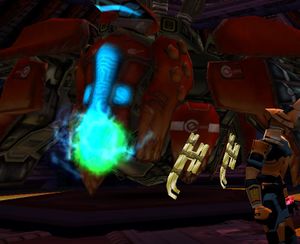 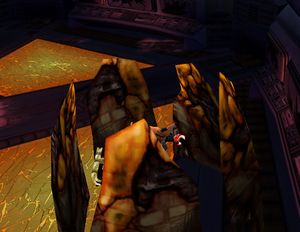 Vol Opt fires a tracking ball that homes in on the targeted player briefly. If hit, the player is trapped in a prison. The player will be unable to act but it can be destroyed by other players. After a charge up time, the trapped player will be hit with a large amount of fixed damage.

Vol Opt was one of three master computers used by Pioneer 1 to control the underground facility found below the Central Dome known as the Mines, and one of the two master computers located in the Mines. Calus and Olga were the other two master computers and Calus was also located in the Mines, while Olga was actually located in a separate research facility. The three machines were designed to keep an eye on each other to maintain balance. According to Calus' conversation with Elly Person in the mission "Knowing One's Heart", both master computers were hacked by an unknown entity after the explosion at the Central Dome. While Calus managed to shut himself down, it is implied that Vol Opt was fully reprogrammed and became aggressive to the investigating Hunters and researchers.