Weapons are basic equipment that are used to deal damage or inflict status effects on the various enemies of Ragol.

Saber, one of PSO's many weapons

All weapons do damage based off the ATP stat regardless of their type (melee, ranged, or technique), but many weapons also boost MST to improve the power of techniques, or increase the power of up to 3 specific techniques. In order to equip a weapon, players must meet its stat requirement, needing a certain amount of either ATP, ATA or MST to do so.

ES weapons, informally known as S-Rank weapons or S-Ranks, are a special category of weapon which encompass all the weapon types and a few extras, such as the Needle. They have the visual of a basic weapon with a brown photon. Unlike regular weapons, they have a few unique properties:

They are obtained after the completion of Challenge Mode with an S-Rank rating, the choice of weapon depending on the episode cleared.

TypeM weapons are a special type of weapon introduced in Phantasy Star Online Blue Burst. They have the appearance of the normal weapon with a white photon, but many TypeM weapons have different animations than what is expected of them. For example, the weapon TypeDS/Rod uses a Double Saber animation with a Rod model.

There are 6 special TypeM weapons on Ephinea available only from events that come with hit and a special:

All weapons possess two weapon-only statistics: distances and angles. Simply put, they are the ranges of each weapon and determine the area that a weapon can strike in. They are split into two types, horizontal and vertical. 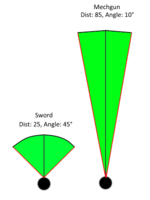 An example diagram of Sword's and Mechgun's horizontal reach

The diagram to the left showcases an example of two weapons with their horizontal distances and angles. The black line is the weapon's horizontal distance, while the red lines are the constraints set by the horizontal angles. As can be seen, the sword has a rather wide area of attack, but does not reach very far. On the contrary, Mechgun reaches much further but can only aim at enemies almost directly in the line of sight.

An example diagram showing how the vertical distances and angles interact

The diagram on the right shows an example of the vertical distances and angles. The black lines show the vertical boundary, but the vertical angle determines (as indicated by the red line) the maximum slope of the projectile.

Specials must connect to the target before being able to apply their effect, so high ATA (Attack Accuracy) helps.

The total formula to determine your special's chance to effect the target is:

Weapons which are listed on the above page suffer reduction when using any sort of special attack, except elemental damage and sacrifical damage increases.

The units below also boost the final rates of Confusion, Freezing, Paralysis and Instant Kill specials. Does not work on special effects from Techniques.