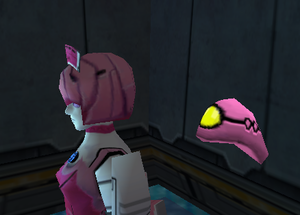 A player with their starter Mag

Mags are equippable robotic companions that accompany hunters on their quests and help out in various ways. Mags can boost a player's stats, cast Resta, Shifta, and Deband on the player, grant temporary invincibility and unleash powerful attacks known as Photon Blasts.

All players start with a level 5 Mag, which grants the player 5 base DFP, and can be raised by feeding it various consumable items. Feeding the Mag will cause it to level up in certain fields, granting the player extra base stats.

Mags may also be obtained from various box drops in Mine, Jungle East and Mountain. For specific item sources, see Mag. 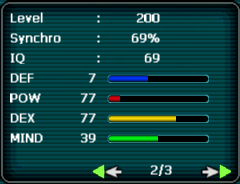 An overview of a Mag's stats

Mags have 4 core stats, DEF, POW, DEX, and MIND, the sum of which determine their overall level. All Mags start out at level 5 with 5 DEF, and must be fed a variety of items to level their stats, which will then be transferred to the player when equipped. A Mag can have a total level of 200, with each stat also having a limit of 200.

Each Mag gains experience out of 100 in different stats for each item to fed to it, so it is important to feed each Mag the correct items depending on how the player wishes for the Mag to level. Mags may also lose experience in the various stats depending on the item, but they cannot lose levels.

At levels 10, 35, and 50, Mags will also evolve, granting them a new form and potentially learning a Photon Blast. The evolution achieved depends on the stats of the Mag, the section ID of the player, and the class of the player evolving the Mag. After level 50, Mags may also evolve every 5 levels if another evolution condition is met.

Mags also have two secondary stats, which determine the power of their triggers and Photon Blasts. These are Synchro, with a limit of 120%, and IQ, with a limit of 200. These stats have no effect on the Mag's total level, and are increased/decreased independently. 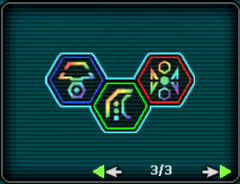 A Mag with three Photon Blasts

Mags may possess triggers, which are special effects that may occur upon 3 different criteria. These triggers are not always guaranteed to occur, and the success rate depends on the Mag.

There are three different effects which may be triggered when a mag trigger is successful:

There are various triggers which are affected positively or negatively by Synchro. These are either "positive" or "negative" triggers, represented by (+) and (-) respectively.

Depending on Synchro, the Mag is boosted by the below table.

A Mag can come in one of 30 different colors. A character's starting Mag color depends on the outfit (in a human's or newman's case) or body (in an android's case) that the character was created with. A Mag dropped from a box will always come with a random color.

These colors can either be obtained either from character creation or from a Mag dropped from a box. All of these colors were available on the original Blue Burst servers.

These colors can only be obtained from a Mag dropped from a box. These colors were added to Ephinea on 2022-03-06.

First evolution Mags occur at level 10 and evolve depending entirely on the class used to level it up to 10.

Second evolution Mags occur at level 35, and their evolution depends what they evolve from and what their highest stat is. The class being used is irrelevant in almost all cases; for example, if the Mag is a Kalki, it can only evolve into Surya, Mitra, and Tapas. If two stats are equal, the Mag will evolve dependent on the class that evolved its 1st evolution; for example, if a Mag's stats are 7/14/14/0:

Any common Mag will evolve into these Mags when fed starting from level 50, and every five levels beyond that. You can switch characters to allow it to evolve again with one feed during an evolution level. This is useful for switching feed tables or cell usage.

Note: Equality conditions for equations with '≥' have not all been verified yet.

All cell Mags use feeding table 7.