Most of PSO's music can be replaced with a few simple steps in Audacity, a free program available for every popular computer operating system. This guide will go through these steps.

The music tracks in PSO are all designed to loop perfectly smoothly, so any tracks that replace them should do the same thing. It's best to find a track with a section that repeats the same section over and over; longer repetitions are generally better, as listening to the same ten seconds of music on loop can get boring.

For this tutorial, we'll be using Rick Astley's "Never Gonna Give You Up".

Use Audacity to open the chosen track.

Play the whole track, and make a mental note of where the song tends to repeat a lot. The bottom of the window will indicate the position of the audio - make sure the unit of measurement is set to "samples" for the most precise loop selection possible.

Once some starting and stopping points have been located, zoom in on both of them using either Ctrl+1 or Ctrl+Mouse Wheel. Clicking anywhere in the track and pressing either the Play button or the Space key will start the track from the chosen point.

After zooming in and finding a more precise starting or stopping point, it is very important to make sure that the point is on or very close to a zero value. This means choosing a point that's very near or directly on the horizontal line that goes across the entire track. If a loop point is chosen that's too far from this line, an audible click sound will play every time the track loops in game.

Make a note of the exact sample position shown in Audio Position for both the starting and stopping points - they'll be needed soon.

Put the values for the starting and stopping loop points in the two boxes to the right of Audio Position. Make sure "Start and End of Selection" is selected.

Now all that's left to do is save the track. Select File > Export > Export Audio... or press Ctrl+Shift+E to begin the process. The file should be saved as an Ogg Vorbis file type, or .ogg. 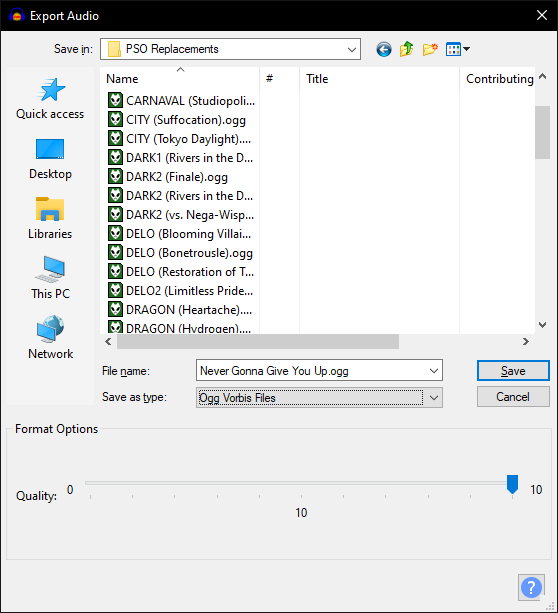 Audacity will display a prompt to edit the metadata of the track before saving it. This is important. Add a new tag called LOOP_START to the end of the tags, with the value matching the sample of the start of the loop. Once you've done that, hit OK. 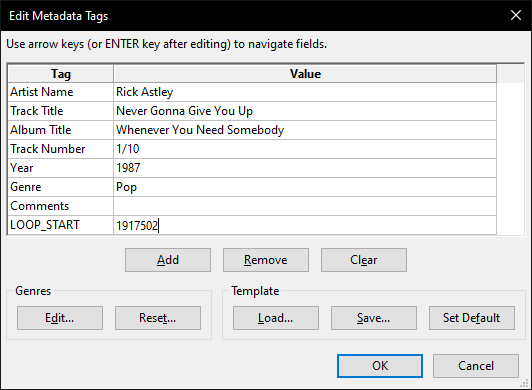 That's the end of the hard part!

PSO's tracks all have unique file names. Once the track has been saved, it needs to be given a name that matches one of PSO's in-game tracks, or it won't play in game. A list of tracks is provided here. Make sure the file extension is still .ogg after the file's been renamed.

Once it's been renamed, put the track in the data\ogg folder and test it out in game!

CUBE_ENDING_LOOP - World with me (looped version)

MILES - Believe in Myself (from Sonic Adventure)

slbgm_dark - The nearest place to the heaven (Dark Falz, pre-fight)